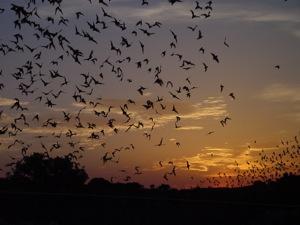 Bats have got a bad reputation. Children of darkness, alter ego of vampires, bloodsuckers, companions to witches - these are some of the negative stories that circulate around these mammals. And while some do feed on blood, most are totally harmless and undeserving of their evil reputation.
Bats can be found worldwide, mainly due to their proficiency in catching insects. Between 60%-70% of the bat species are insectivores, feeding on such bugs as moths, crickets, gnats and especially mosquitoes. And like all creatures, food supply determines where bats can live and thrive. This results in bats being either migratory or under going hibernation during cold months. Bats in BC (of which 16 species call our province home) will do both.
There are two main types of bats, megabats and microbats. Megabats are mainly found in tropical areas where they feed on fruit or nectar. These large bats have small ears, large eyes and, because their food is stationary, do not rely on echolocation. Microbats are small bats found in most areas of the world. They have large ears and use echolocation to feed on a variety of foods. Most eat insects although there are some that feeds on fruit, fish, reptiles, small animals and blood.

Echolocation in how some animals, like dolphins and bats, use sound to locate their prey. A sound, usually very high pitched so we can't hear it, is produced by th bat. The sound waves travel through the air until it meets an object, like a moth. When it hits this object, some sound waves bounce back to the bat. A bat is able to determine how long it took the noise to return which tells him how far away the moth is. Not only that, a bat can determine where the food is, how big it is and what direction it is traveling in by the intensity of the returning echo.
Armed with this knowledge, the bat is able to swoop down on the unsuspecting moth. Dinner is served.

Bats are incredibly important in the world ecosystem. More than 80% of trees in the rain forest rely on bats for pollination. In moderate climates, bats are important for controlling the insect population on which they feed intensively. Every night, one bat will eat their own body weight in insects. Or, in human terms, it would be like you eating 50 pizzas nightly. For this reason, more and more areas are looking to bats to control insects rather than using harmful pesticides.
Bats usually live in large colonies (the size and makeup of the colony will vary between species) that often consist of mothers and pups. Female bats will breed in the fall before hibernation but will not become pregnant until early spring. This allows the young to be born in June or July when there is plenty of food. Gestation ranges from 30-60 days and 1-2 pups are born each year. Mother nurses the young until they are able to fly and then she assists them in their early foraging attempts. Since it may take a while to learn how to catch dinner, the young bats are supplemented with milk until fully independent.
Hibernation or migration for many North American bats will occur from late October to early April. Bats will hibernate under bridges, in tunnels, old buildings, caves or old mines. They wake frequently during the winter to move and switch positions. It is dangerous to disturb bats at this time. If the colony is disturbed and the bats move too much, they may use up too much of their stored fat, resulting in death during hibernation.

Attracting Bats to Your Backyard

Thanks to their appetite for insects, many people would like to attract bats. Like birds, certain conditions are favoured by bats so by offering these your backyards may become home to one or more.
Water - Insects like water so bats like water too, making it a very important bat attractant. Bats normally forage along streams, creeks, rivers and other water sources. If you don’t live by any natural water source, even a small pond will do.
Roosting Sites - Bats need somewhere to roost during daylight hours so large trees, either dead or alive are important. Bats will also choose behind shutters, under shingles, bridges, tunnels and other areas in man-made structures.
Gardens - Gardens that have fragrant night flowers will attract night insects. Plants like sweet rocket, evening primrose, nicotiana, and herbs like chives, mints, marjoram and lemon balm are good choices.
Night Lights - Almost nothing attracts moths and other insects like a light so placing a light on a pole will give the bats plenty of insects to feed on. An added bonus, you can also watch them feed.
Chemical Free Yards - Avoid the use of pesticides and herbicides in your yard. Insects will become contaminated with toxic chemicals which will, in turn, contaminate the bats. The poisons (if they don’t kill the bats outright) will become stored in the fat of bats. These fat deposits are used during either migration or hibernation. When burned for energy, the concentrated pesticide residues are released into the blood stream, resulting in illness or death.

Bat houses are important tools in attracting bats to your yard. A bat house provides a secure habitat for bats, keeping them close by so they can gobble up thousands of insects yet provide them with an alternative home so they don't invade your house and cause problems.
A successful bat box is dependent on the correct placement and design. Studies have shown that if done right, most houses will be occupied within the first six months, 80% within the first 2-3 years. If the bats still have not moved in after the third summer, relocate the box to a better spot. Multiple bat houses placed in your yard that offer different housing option will also increase your chances of success in attracting bats.
Bats prefer houses that are

A successful bat house should also have the following characteristics